Elon Musk is not making a secret of where he stands on the political spectrum any longer.

On Friday the billionaire, who just had his bid to purchase Twitter accepted by its board of directors, sent a tweet that shook liberals.

“The far left hates everyone, themselves included!” he tweeted. He later followed that with another tweet giving a tepid condemnation of the “far-right.”

“But I’m no fan of the far right either. Let’s have less hate and more love,” he said. 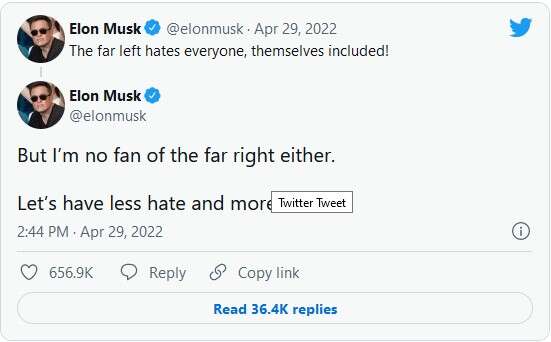 It came after a tweet he sent on Thursday where he showed himself becoming more right-leaning.

The meme shows him in 2008 being left of center and the liberal with a caption that said: “my fellow liberal.”

On the next line it shows 2012 and Musk is in the same place, but as the sides get more extreme and the center moves Musk is now only slightly to the left of the center and the liberal is now further away with the caption “my fellow liberal?” this time posed as a question.

By the line that shows 2021, it shows the center moving far to the left and Musk now being closer to the conservative and on the right of center with the liberal now labeled as a “’ woke’ progressive’ and calling him a “bigot.” 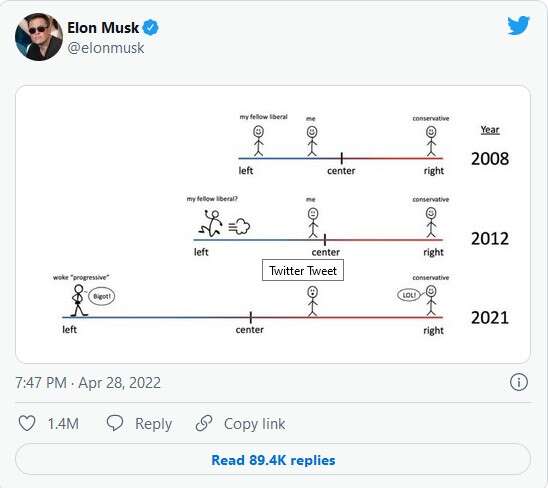 Sounds like Elon may have formed a company that is wildly successful at making electric cars, another that takes people into space, and another that brings the Internet to people. And the people making minimum wage did, what?

“Hey Elon, what if I was to tell you that the data shows a very different story about which party is radical? Would you have the balls to even look at it?” Rachel Bitecofer said. 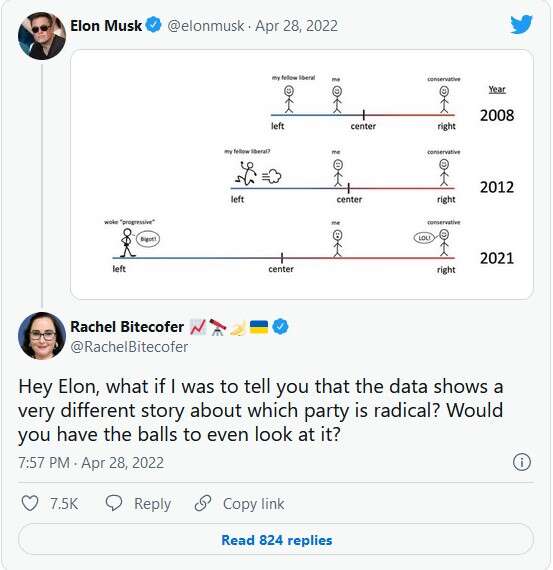 “There’s nothing noble about being a centrist. It’s a space of ambivalent privilege that only exists for those for whom political and economic changes and challenges have little effect on their own lives,” Zack Hunt protested.

On Friday’s tweet, there was more of the same animosity.

“Ya know I didn’t ‘hate’ him before, but the more he tweets….,” one Twitter user said.

“I used to love you. My respect for you is diminished every time you put out garbage like this. I own a Tesla, stock in Tesla, I adore Space and SpaceX, I went to a NASA Social for DM-1 and supported you publicly, even spoke with over 40 classrooms of children about you,” another said.

“So this is why you’re buying Twitter. You’re trying to influence an election so you don’t have to pay taxes. Got it,” another Twitter user said.

“Billionaires will try and divide the workers of the world so they cannot unite. We have nothing to lose but our chains,” tech reporter Adam Smith said.

“The guy who says he wants to equally offend ‘both sides’ to prove neutrality only ever seems to attack the left. So weird right? So weird?” MSNBC host Mehdi Hasan said. 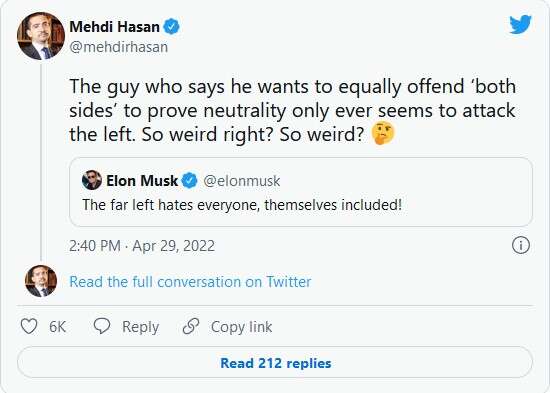 But not everyone disagreed.

“Anyone who says the Left has not radicalized over the course of the last twenty years is insane. In 2008, Barack Obama defended traditional marriage. The 2008 DNC platform said, ‘taking police off of the street is neither tough nor smart; we reject this disastrous approach,’” Ben Shapiro said.

“Elon Twitter is the best Twitter, like, ever. Only because of the reaction and knowing he owns the platform where the reactions are happening,” Joe Concha said.

Receive the latest news for free!